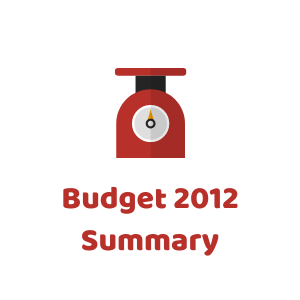 From 6 April 2013 those who reach age 65 on or after that date will not receive an age-related allowance, but will instead be entitled to the standard personal allowance of £9,205. This allowance is expected to rise to £10,000 in April 2014 or 2015. The existing age allowances given to people born before 6 April 1948, will be frozen at current rates as shown below.

The reduction in the 40% threshold is balanced by the increase in personal allowance by £630. This means that in 2011/12 you start to pay 40% tax when your total income before allowances exceeds £42,475. In 2012/13 the 40% tax threshold is set at exactly the same amount: £42,475, before deduction of personal allowances. You can increase your own personal 40% threshold, by making donations under Gift Aid or paying personal pension contributions in the tax year.

* Only applies if non savings income is below this amount.

There was much speculation before the Budget about the removal of the 50% rate that applies to taxable income above £150,000. This 50% additional rate remains in place for 2012/13, but will bereduced to 45% from 6 April 2013. The Government has also published most of the other tax rates and thresholds for 2013/14 as follows:

* Only applies if non savings income is below this amount

Another area of speculation was the withdrawal of child benefit from families where at least one parent pays tax at 40% or higher.

The Chancellor listened to reason and has decided to taper the withdrawal of child benefit where the higher earner’s net income (after losses but before allowances), exceeds £50,000. For every £100 of income over £50,000, a tax charge will apply equivalent to 1% of the child benefit received by the family. This will lead to the complete withdrawal of child benefit at £60,000 of net income. This tax charge is to apply from 1 January 2013, and will be collected through PAYE and self-assessment from the higher earning partner in the family.

If you, or your partner, are currently in receipt of child benefit you don’t have to do anything now. HMRC will be writing to all those affected by this change later in 2012. However, please discuss with us how you could re-arrange the distribution of income within your family, to reduce the affect of the withdrawal of child benefit. Any action in this area should be taken as soon as possible to ensure the new arrangements are in place for the full tax year 2012/13.

The following summarises the rates and thresholds that will be cut or frozen in 2012/13 compared to 2011/12.

The income disregard provides a buffer for changes in income, so overpayments of tax credits do not arise where income varies within this threshold year on year. This affects families with fluctuating incomes, such as the self-employed. If you are in this position you need to finalise your profit figures as close to the tax year end as possible and provide those figures to the Tax Credits office without delay.

There are also changes to the tax credit rules from April 2012, which affect the number of hours the adults in the family must work to qualify for working tax credits. Lone parents are not affected by these changes.

The Chancellor wants to deal with wealthy individuals who take advantage of tax reliefs that have no annual limits, such as relief for trading losses, charitable donations, and capital allowances. He is proposing that from April 2013 all such tax reliefs will be capped at the greater of £50,000 per year or 25% of the taxpayer’s gross income. If this idea becomes law it could significantly affect loss-making businesses that are not conducted through a company.

Both the company and the investor have to qualify in order to receive tax relief under SEIS or EIS. The rules for both schemes are very complicated, so please talk to us before deciding to use either scheme.

There has been no change in the rates or thresholds for capital gains tax (CGT):

Currently only UK resident individuals pay CGT on gains, even when the property is located in the UK. The Government is considering how CGT can be applied to gains made on residential property in the UK, when the owner is resident in another country. Any changes will apply from April 2013 at the earliest.

If you acquire shares through an approved share option scheme run by your employer, you must pay CGT on gains made when you sell those shares, after deduction of your annual exemption. The CGT will be charged at 18% or 28%, as the conditions for the entrepreneurs’ relief rate of 10% are unlikely to be met. The Government is considering changing the rules for approved share option schemes so the 10% rate can apply to shares acquired by employees. Any changes will apply from 6 April 2013 or later.

The inheritance tax (IHT) nil rate band remains frozen until 2014/15. This is the amount of a person’s estate that is free of inheritance tax. However, for deaths occurring on and after 6 April 2012, when at least 10% of their estate has been left to charity, a reduced rate of IHT applies to the chargeable estate. Gifts made to charities are exempt from IHT.

You pay stamp duty when you purchase a property in the UK. There has been a lot of talk about how some people have avoided paying SDLT on high-value homes. The tax avoidance scheme usually involves an off-shore company.

To deal with such schemes the Government has introduced new rates of SDLT on purchases of residential property valued at over £2 million:

An annual tax charge may also be applied to the value of residential property held by certain companies, where each property is worth over £2 million. Any such charge will apply from April 2013.

The Government wants to simplify the accounts small businesses (partnerships and sole-traders) have to prepare for tax purposes. It is consulting on whether preparing accounts on a cash basis would be easier, and standard allowances could be used for the business use of vehicles and the proprietor’s home. Any changes are likely to apply from April 2013 or later.

The small profits corporation tax rate remains the same at 20% for the year from 1 April 2012.

For 2012/13 the main rates and thresholds for NI contributions are:

The Government is consulting on how to integrate the administration of income tax and NI for employers and the self-employed. Such reforms are unlikely to come into effect by 2014 or later.

The Government wants to encourage more employees to acquire shares in the companies that employ them. Small and medium-sized companies can use the Enterprise Management Incentive share option scheme (EMI) to grant share options to employees, but there is a £120,000 cap on the value of share options each employee can acquire. The Government plans to raise this cap to £250,000 as soon as possible.

The tax charge for the private use of a company car is based on a percentage of the list price of that car when new, the percentage being based on the vehicle’s CO2 emissions.

The taxable benefit when fuel is provided for private use in a company van is frozen at £550 for 2012/13.

The VAT rates remain unchanged at:

– The standard rate of VAT will apply to the supply and installation of energy saving materials in non-residential buildings used for non-business purposes by charities. Currently the lower rate of VAT applies
– The invoicing rules will be simplified
– Exemptions will be introduced for commercial Universities
– Cable-car rides will attract the reduced rate of VAT, where each cable car holds fewer than 10 passengers.

The Government is consulting on the existing VAT law in the following areas, so expect changes in the future…

If you have any, feel free to contact us