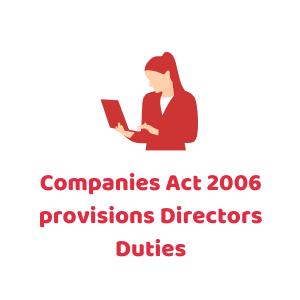 You may be aware that in late 2006 the Companies Act 2006 became law. Although it did not become effective until late 2009.  This Act said to be the largest single piece of legislation. Ever enacted in the UK with some 1300 sections and 16 schedules.
The purpose of this letter is to highlight some key issues arising from the Act which are especially relevant to the day-to-day operation of a private company.

In principle, the Act represents the result of a consolidation/codification exercise in which many existing provisions have simply been carried over into the new Act with little, or no, change.  However, there is some evidence that the Department of Business is taking a stronger line in considering whether the Company director has complied with its Companies Act 2006 statutory duties of office (see below).

Particularly where companies have failed.  In 2009 the number of director disqualifications was more than in the whole of the previous three years and the number of disqualifications has continued to rise in 2010 and 2011.  Historically directors’ duties were mainly common law obligations but Companies Act 2006 now places such duties on a statutory basis and therefore it is perhaps easier to show that breaches have occurred.

The main circumstances which can lead to a director disqualification order are where companies have continued to trade whilst insolvent, companies have operated to the general detriment of creditors, there has been a failure to keep appropriate books and records, file accounts, pay taxes when due or deal with other compliance obligations.

In view of the above, it is clearly important to ensure compliance with all the Companies Act requirements and the remainder of this letter outlines the matters which are likely to be particularly relevant to private companies.

All electronic communications (principally e-mails but also applicable to text messages etc) must include details of the company’s full name, place of registration, registered office, and registered number.  Similar provisions apply to company websites.  Limited liability partnerships are also bound by these requirements, breach of which will incur a fine of up to £1,000.

Perhaps the most significant change brought about by Companies Act 2006 is that the duties of directors which have built up over the years via case law have been clarified, expanded and codified as statutory obligations as follows such that directors:-

The Act also eases the procedure for action to be taken for breaches of the above duties.  One relaxation, however, is that the previous prohibition on loans to directors is removed provided such loans are approved by the shareholders.  (NB This relaxation does not extend to the adverse tax implications of loans to directors which continue to apply unchanged and also note that for accounting periods beginning on or after 6 April 2008 considerable detail must be disclosed in the notes to the accounts in respect of individual transactions on overdrawn balances).

The requirement under the Companies Act 1985 to keep “proper” accounting records has been replaced in Companies Act 2006 with a requirement to keep “adequate” accounting records.  A new statutory duty is also imposed on directors to approve only accounts that give a true and fair view of the company’s assets, liabilities, financial position and profit or loss (thus clarifying the previous legal position under which company accounts had to be prepared to show a true and fair view or be prepared in accordance with International Accounting Standards).

The previous exemption for medium-sized companies from the requirement to produce group accounts has been abolished and all companies except those which are small will have to include a business review as part of the directors’ report.

The accounts for private companies (with a start date on or after 6 April 2008). Need to be filed at Companies House within nine (previously ten) months of the balance sheet date. Thus from 1 February 2009 accounts filed late incur higher levels of late filing penalties. That was previously the case with additional penalties where accounts are late for two consecutive years.

Where the balance sheet date is, say, 30 June the filing date will. However, be 31 March the following year rather than 30 March, as was the case previously under the “corresponding date” rule.  The exact format and content of both full accounts and abbreviated accounts are similar to those previously in use. Will apply the account periods commencing on or after 6 April 2008.

However, one significant change is the full details of all loans and advances to a director. This is made at any time during an accounting period must now be disclosed in the company’s annual accounts.

The ability of private companies to repay issued share capital has been simplified. Now involves a statutory solvency declaration by the directors rather than the need for court approval.  Also, the requirement for an auditor’s report for providing certain types of financial assistance has also been removed. Both new and existing companies will only be able to appoint directors aged 16 or over. Will have to have at least one natural (i.e. living) person as a director. With single company hires, it would no longer be necessary to escape the duties of the Director.

Nor the recruitment of juveniles, even as certain current positions have been subjecting. To temporary agreements by October 2010.

Companies have been incorporated under the 2006 Act with effect from 1 October 2009. Such companies do not need to have a “Memorandum of Association” in the previous sense. i.e. The 2006 Act “Memorandum” consisting of the names of the subscribers. The needs for Authorised Share Capital and Company “objects” have disappeared.

New simplified model “articles” apply unless tailor-made articles adopted.  Existing companies are able to adopt, via a special resolution. The new structure should they so desire although it should note. So, the common condition included in the past in the articles of private companies. That gave directors the unfettered right to fail to report a transfer of shares for any reason. That has outlawed by Section 771 C.A. 2006 which requires reasons to be given in all cases.

Unlike before the owners pay a dividend includes the approval of necessary legislation. The production of dividend vouchers, and responsibility on directors. To ensure dividends are only paid when distributable reserves are available. It is prudent to do so and the position of company creditors not prejudiced.

In conclusion, there are ongoing company director law obligations to consider which should not be overlooked.  If there are any specific matters you wish to discuss then please do not hesitate to contact me accordingly.