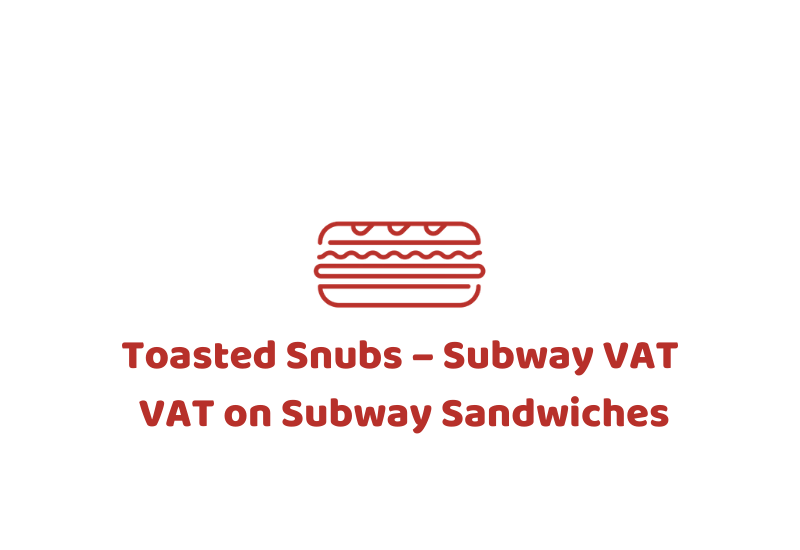 Posted at 23:32h in Personal Tax by admin 0 Comments
0 Likes
Share
Toasted subway sandwich fans will now have to pay vat on subway sandwiches From now on after the vat ruling.. It looks like bad news for over 1,200 Subway franchisees as Sub One Ltd loses its challenge in the upper Tier Tribunal against HMRC’s view that sales of “toasted subs” and “meatball marinara” sandwiches are subject to VAT at the standard rate. The lead appeal fronted by Sub One Limited t/a Subway (Case ref [2012] UKUT 34 TCC) and was in response to the First-Tier Tribunal decision of 14 October 2010 (case ref [2010] UKFTT 487 (TC)) that supported HMRC’s opinion that sales of these products fell within Note (3)(b) of Group 1 of Schedule 8 of the VAT Act 1994 and were thus excluded from zero-rating being supplies of hot food for the consumption of the premises, such supplies considered as supplies in the course of catering. This is a long-standing dispute and the outcome is likely to have far-reaching implications in the catering and takeaway food sector so this announcement has awaited with some anticipation
At the end of bringing the appeal, the legislation worded differently, and Note (3)(b) then expanded on the definition of ‘hot food’ to mean “…food which, or any part of which – i. Has heated for the purpose of enabling it to consume at a temperature above the ambient air temperature; and ii. Is above that temperature at the time it provided to the Customer”. This appeal argued, among other issues, three key points;
a. Whether the First Tier had approached the question of point (i) above in the correct manner,
b. Whether the decision amounted to a breach of fiscal neutrality,
c. Whether the supplies in question considered as goods or services.
Much attention given to the Court of Appeal’s judgment in the case of John Pimblett & Sons Ltd and the question of doubt raised about that decision’s compatibility with EU principles of fiscal neutrality and objective assessment. The nub of the issue was to consider whether one should place emphasis on the supplier’s intention when heating the food or the underlying purpose of heating the food. It concluded that the factors relied upon in Pimblett were subjective in nature rather than objective, as required in line with EC principles, so could not rely on as the correct interpretation to applied in the case of Sub One Ltd.
In this case, for both toasted subs and meatball marinara, the Tribunal concluded, on an objective assessment of the facts, that the food heated for the purpose of enabling it to consume at above ambient temperature and not for some other reason. The First-Tier Tribunal was therefore correct to conclude they are liable to VAT at the standard rate even though they may have applied the wrong test to get to that conclusion.
The fact that Pimblett had relied upon in several cases over the years with inconsistent outcomes and the fact that HMRC did or did not appeal them or amend guidance or legislation in the light of those other cases was not held to be a reason to conclude there had been a breach of fiscal neutrality.
On the subject of whether the supplies were goods or services held irrelevant. Counsel for HMRC pointed out the criteria for an exception from zero-rating under Group 1 Schedule 8 VATA94 was not that of “catering services” but of supplies “in the course of catering”.
Based on its findings, the Tribunal concluded the food heated for the purpose of enabling it to consumed at a temperature above ambient air temperature and supplied to the consumer whilst still above that temperature.
It thus met the criteria for exclusion from zero-rating and VAT is due at the standard rate on such supplies. The appeal dismissed.