Tax on Residence Transferred Between Spouses 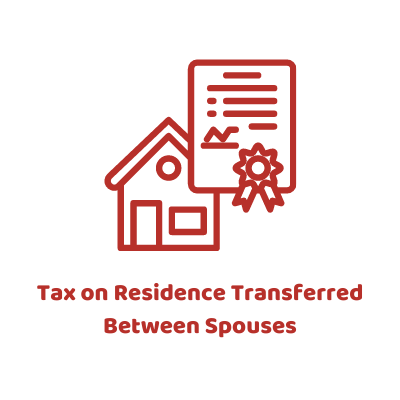 When a residence is transferred between spouses or civil partners, living together, whether by sale or by gift. The period of ownership of the transferee TCGA 1992 S222(7)takes care of it:

(a) At the beginning of the period of ownership of the transferor. This also applies where the residence is transferred from one to the other on death.

This provision only applies for the purpose of computing private residence relief. It has no effect on the computation of the gain which arises on any disposal by the transferee spouse or by the transferee civil partner.

Compulsory Conditions to Transfer Residence Between Spouses or Civil Partners:

In some situations, the extended ownership period will not be to the advantage of the transferee.

Ann and Andrew were a married couple. They lived together in a house which Ann purchased in March 1990. For the first five years of her ownership, the house was rented to tenants. When Ann died the house passed to Andrew. He continued to occupy it as his only residence until it was sold.

When Andrew accounted for the period he owned the house, the private residence relief would be available for the whole period. He needs to consider the ‘extended ownership period’ from March 1990 to the date he sold the house.

During this extended ownership period, the house was rented to tenants which means that the private residence relief is restricted.

On 1 March 1995, Bob and Brenda married into a new house. After marriage, they nominated Brenda’s house to be their main residence as from 1 March 1995. Brenda originally purchased the house on 1 September 1990.

Bob’s loss on the sale of the house is as follows:

As private residence relief is available on the property only part of the loss is an allowable loss. Bob takes over his wife’s period of ownership of the property.

The above is explains HMRC capital gains:

The legislation which deals with ‘private residence relief; is often referred to as ‘principal private residence’ relief (or PPR relief) is Taxation of Chargeable Gains Act 1992 sections 222 to 226.

Section 222(7) states the following in relation to the period of ownership when there is a transfer between spouses:

From section 222-226, ‘the period of ownership’  has different interests at different times. This is taken to begin from the first acquisition taken into account.

Arriving at the expenditure which under Chapter III of Part II is allowable as a deduction in the computation of the gain. To which this section applies. This is the case of an individual living with his spouse or civil partner: